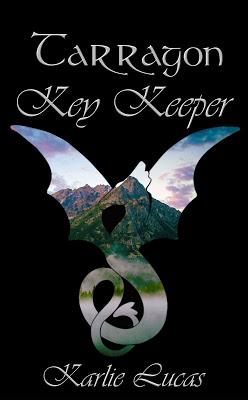 For hundreds of years, the gates of Tarragon have been sealed from the outside. Prophecy speaks of the day the last Key Keeper will return and wake the dragons from their spell-cast slumber, returning them to their rightful home.
Seeking to fulfill her father's dying wish, Anwen Porter travels to the Drakonii Mountains where she meets Tyler, a mysterious local with a secret. With his help, she learns more about her clouded past and her own abilities. But when Courtney, a lovesick mage, tries to insert herself into their plans, things begin to go horribly wrong.
With death threatening at every turn, Anwen must learn to rely on her newfound friends to survive. But how can she unravel the mystery of her heritage when everything is trying to kill her? 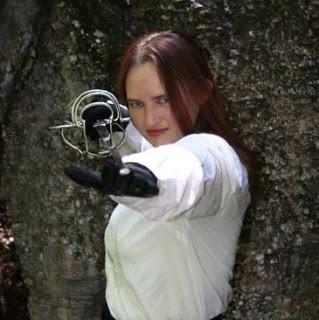 Karlie Lucas is a preschool teacher by day and a writer/artist by night.A graduate of Southern Utah University, Karlie received a B.A. in Creative Writing, with a minor in art. She is a member of Sigma Tau Delta, The International English Honor Society, as well as ANWA, the American Night Writers Association.Karlie is interested in all things magical and mysterious, especially elves and dragons. She is an avid fan of J.R.R. Tolkien and J.K. Rowling.When not writing, Karlie can often be found drawing, baking, watching her favorite old school shows, or just spending time with her family.She currently resides in Dallas, Texas with her husband and a cat named Kally

Top Ten List
Top Ten People I would like to meet.
1. J.R.R. Tolkien. I mean, who wouldn't want to meet the "father" of fantasy?
2. J.K. Rowling. If she can make it with an oddball fantasy series, surely I can too, and I'd love to pick her brain about that.
3. Joan of Ark - I think her life story is just fascinating.
4. C.S. Lewis - He was an amazing writer. Can't imagine what life would be like without Narnia.
5. Robin McKinley - She's always been one of my fave fantasy authors. I have a few bones to pick though, about hinted stories that never got written.
6. Mark Twain - He seems like he'd have been a great guy to know.
7. Albert Einstein - Would love to meet the man who contributed so much to how we see the world.
8. King Charlemagne - An ancestor on both sides of the family, I understand he was one of the first people to instigate a public education system for his people. That, and he had some really cool things happen in his life.
9. Harrison Ford - He's one of my fave actors of all time. He's just awesome.
10. Danny Kaye - Another childhood favorite actor, I think Danny and I would have gotten along swimmingly. That, and the fact that he sang like a dream, even though he couldn't read a note of music.

Courtney pounded up the stairs, almost tripping over a spike that protruded from the last stair. It took her a moment to spot her somewhat friend lying unconscious by the far window. Almost flying the last few feet, she knelt by Anwen's side, shaking her. “Hey, this isn't funny. Wake up.”
When the auburn-haired girl didn't respond, Courtney looked around with large eyes. "Tyler's going to kill me," she uttered, her voice changing pitch. "Come on, Anna. Please!"
The wind picked up, whipping her long hair and she moved to brush it aside. A dark shadow fell over both teens as Courtney turned back to the unconscious girl. It stretched up the wall like a menacing beast. Her heart thudded in her chest as she made to slowly turn around. Before she could so much as turn her shoulder, the shadow's owner was upon her.
“What did you do to her?" Tyler yelled as he thrust Courtney aside, using far more strength than he'd normally use on a mortal. His whole body shook with fury.
Courtney tumbled, then skid across the floor. She shivered in the corner where she landed, legs askew in front of her, her expression filled with shock. It took a moment for her to find her breath. For the briefest of seconds, she thought Tyler's eyes had changed color as he stared at her with anger-filled eyes.