#TopTen #Snippet #Giveaway: 'Changes of the Heart' by Debra Erfert

A coincidence is God’s way of staying anonymous. 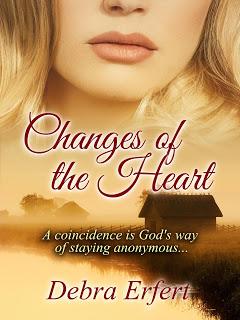 Buying the 1920s farmhouse south of Phoenix, where the rumors of John Dillinger’s gang hid out in the 30s, is supposed to be Grace Evanheart’s way of escaping an old romance. When she finds an ancient diary with a map under the bedroom’s floorboard, the rumors solidify into fact. She doesn’t know who to trust with the news; Micah Stevens, the handsome deputy and the great grandson of the original landowners with whom she’s attracted, or Jerry, the young historian who seems too intent on learning about her new home?
Micah seems convinced their paths cross exactly at the right time and in the right place for them to fall in love. Now he just has to convince Grace of the same thing before suspicions of his real motive have her running again. 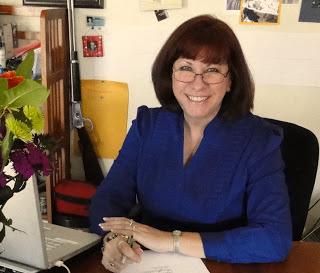 "Debra lives in Southwest Arizona, and has been married to Mike for 36 years. She's the mother of two awesome sons, who married their forever loves, and she's a grandmother to three beautiful grandchildren with one more on the way.


Debra wrote her first novella thirteen years ago just for grins. That brief taste into the world of an author started an undeniable writing obsession rivaling only her love of chocolate. She's an award-winning fine artist, and loves traveling with her husband."

Top Ten List
1) I have an intense fear of flying, bad enough I need medication to even walk toward a plane.
2) I have an unreasonable fear of heights. I’m pretty sure this has an impact on my fear of flying.
3) I’m terribly claustrophobic. That might have something to do with my fear of flying—maybe.
4) I’m a multiple-award winning fine artist specializing in portraits. I received a drawing kit for Christmas when I was seven or eight years old, with a drawing pad, pencils, one of those silly gum erasers, and an awesome book that had step-by-step examples. I drew a little boy wearing a sombrero, and my mother used the side of a pencil and shaded it, making it pop off the paper. I used this memory in one of my books.
5) This little known fact is one that my husband dislikes; I love bags—handbags, tote bags, and messenger bags with sayings on them. I can’t pass by a display of bags without Mike grabbing my elbow and hurrying me by them. The top shelf in my closet is solely for bag and purse storage. I’m pathetic. It could be worse, I suppose. I might have the same obsession for matching shoes with each bag.
6) I’m married to a retired cop, who’s brother was a cop/latent identification expert, and who’s dad was a cop for 34 years, and now we have a son who’s in law enforcement. I’m never at a loss for experts when writing.
7) I was a volunteer with our local police department for several years. I rode with willing officers, went on calls with them. On occasion, I even helped in taking report information and traffic control. They didn’t let me carry a gun, although I did design their shirt patch.
8) I write a little bit of myself into every story. In Changes of the Heart, poor Grace deals with my clumsiness. Really! Once, I sprained my ankle so badly, the doctor told me that it would’ve healed faster if I would’ve broken it. My foot turned black from my toes up to my knee.
9) Changes of the Heart was a top 3 finalist in the 2014 Marilyn Brown Unpublished Novel Contest. Marilyn and her husband have set up an endowment at Utah Valley University to honor superior works of fiction written by literary artists.
10) I dislike coconut. I mean, really, sincerely, honestly dislike coconut.

Snippet
Strawberries slid down the stark white wall, juices dripping in thin bloody ribbons toward the broken bowl near the baseboard. If I’d aimed six inches to the left, I’d have hit my boyfriend’s head as he left.
Correction—my ex-boyfriend.
Three soft, confident taps on the door preceded my neighbor’s entrance. I knew who it was before I saw Chelsea Vanderbilt’s short, rainbow sherbet tips and blonde roots. She made my brown hair seem dreary and bland.
“Hey, Grace. I take it David’s gone.”
“He’s gone.” I followed her gaze to the newly redecorated wall. “I missed.”
Chelsea knelt down and picked up the largest chunk of ceramic bowl. “Well, lady, it’s probably a good thing you missed. He is the litigious type.”
I fell onto my hide-a-bed sofa, sighing loudly. “He told me he’s not ready to commit. That we should just be friends.”
Chelsea picked up a smaller bit of broken bowl and dropped it into the piece in her hand as she snorted. “I thought you were already friends.”
“I thought he was going to ask me to marry him. Instead, he dumped me.” I turned on my side and bumped my head on the worn-out arm of the couch. The brief pain only solidified my anger. “I’m going to be thirty next month. Alone forever! What am I doing wrong?”
“You’re not doing anything wrong,” Chelsea said, dropping the broken bowl into the trash, “except for maybe putting your trust in a man who never earned it.”
“I probably shouldn’t have dated someone younger.”
Chelsea turned and rested her skinny hip against the cabinet. “Five years isn’t that much of a difference. David’s a grown man.”
“Apparently he thought I was too old for him.”
“I don’t think your advanced age has anything to do with it.” I threw a tiny accent pillow at Chelsea’s head—and missed. Either I needed to stop throwing things or take better aim.
I stared at the many rings on Chelsea’s fingers, including the ones on her thumbs, and said, “Or I just wasn’t exciting enough.”
“Maybe now you’ll learn not to fall instantly in love with the next guy to look into your baby blues.”
“They’re green.”
“You know what I mean.”
“I wish I didn’t.”
David Sullivan had asked me out about five minutes after running into me—literally. I was out for a rare morning jog, went around a bend, and ended up in a tangle of arms and legs with a bloodied lip. That was two short years ago.
“What are you going to do now?”
I gazed around my apartment. None of the beat-up furniture was mine. I barely had room in one corner for my six-foot easel, and most of my cabinet space was taken up with my art supplies instead of dishes. I needed room. And I needed to get away and forget about David.
I sat up and put both feet on the worn-out carpet. “Start over. I know how."