#Spotlight #Giveaway: 'No Trouble at All' by Lisa Acerbo 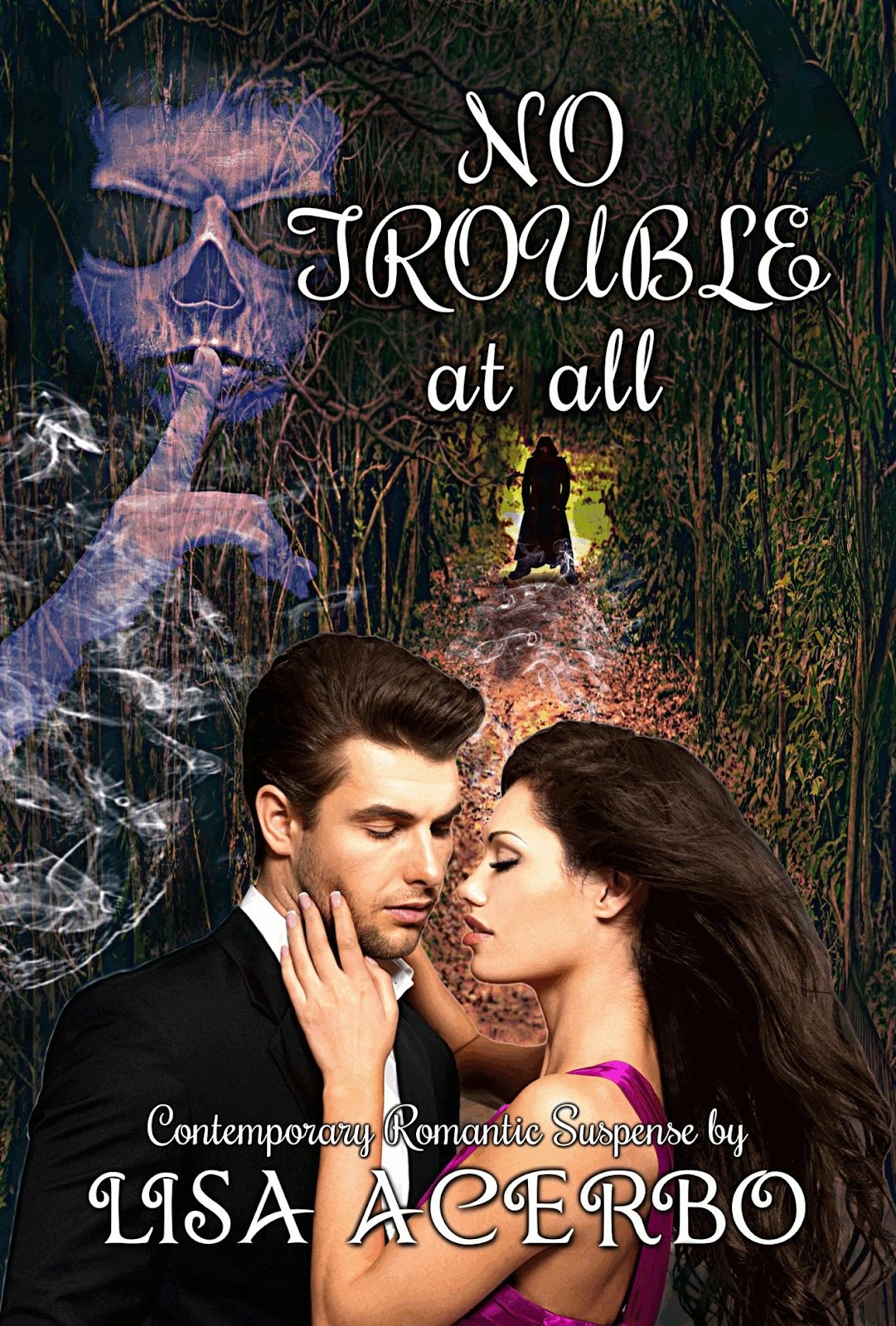 No Trouble at All
Lisa Acerbo

Trouble from the Past can Kill your Future.

It's a bad day for Sophie Carter when she stumbles across a dead body in the woods. But when the suspected murderer turns out to be a leather-clad vagabond who died in 1889, her carefully controlled quiet life explodes. Not only is Sophie in the wrong place at the wrong time, but as a local history buff who loves old legends, she knows too much about the past to remain uninvolved. Trouble is a killer and no one can escape.

Detective Jackson Lynch asks Sophie to help him decipher the legend of the Old Leather Man and unravel the mystery of the murdered woman. Going against her best judgment, Sophie joins forces with the distractingly sexy detective on the police investigation and in pursuit of a killer. Jackson is hot to solve the case as they follow the clues through Connecticut and New York State, uncovering both legend and fact.

As they move closer to solving the murder, a series of missteps shove Sophie into Jackson’s arms and straight into the media. Trouble is everywhere. Jackson’s career begins to crumble and Sophie becomes a suspect in the heinous crime. The case unravels. The past and present collide. Sophie is swept into more danger than she could ever imagine when the Old Leather Man comes looking for her hide to tan.

Amazon    BN    DestinyAuthor
Excerpt:
Sophie loved to hike and run, continuously finding new trails to explore in the vicinity. She enjoyed the convenience of living forty-five minutes outside New York City, just over the New York border in Glenville, Connecticut. The town was far enough away that she could still immerse herself in nature, but close enough to the city that she could attend concerts, events, and culture when she needed a change. She explored the abundant state parks and open green spaces that abounded close by, enjoying the diversity found in the change of seasons.

Today was a little different. Sophie had departed for her run from her home in southern Connecticut much later than anticipated. A fender bender at the local Starbucks in Greenwich delayed her further.

In her defense, she had just tapped the back of the other car when she backed out of her parking space. There had been minimal damage. The white haired older couple, Fran and Frank Bunkowsky, while a tad grouchy about what the dent might mean for their insurance, were overall relatively pleasant.

They even invited Sophie for tea the next day.

Then Sophie had driven the thirty odd miles to the Pound Ridge Reservation, looking forward to an energizing run.

But her morning continued to be troubled.
As she locked her car and began to stretch, sweat streamed from her brow in large droplets. The autumn day in the forests of the outer suburbs of New York City had turned muggy. At the entrance of the trail where she planned to begin her run, the day turned angrier and even more unseasonably hot for September. The threat of thunderstorms darkened the skies. To top it off, she had forgotten both bug spray and bottled water, making the jaunt through the woods not nearly as relaxing or therapeutic as expected.

She could not shake the premonition that things were about to get worse.

This wasn’t the first time she had felt that way. Probably would not be the last. Nature, at least, offered solace and peace.

She began to run the trail.

For the last few years since she had quit her job at the hospital because she just couldn’t handle watching people die anymore, Sophie regularly came here to watch the maple, beech, and birch trees turn shades of leafy avocado green in Springtime and then morph to bright yellows, reds, and oranges in the Fall.

This was one of the prettiest areas to visit year round. She loved the changes that came month by month making each trip unique. While a few tree leaves had swapped green for yellow, it was still too early in September for a dramatic seasonal display.

Gnats, on the other hand, were in full force, swarming around her curly brown ponytail like tiny fighter jets while leaving every other hiker she passed on the trail alone. They must like her shampoo. The ecstatic bugs were drawn to her chestnut curls like it was irresistible gnat candy.

She swatted at them, vowing to change her hair products as soon as she returned home. She tightened her ponytail in the elastic that had come loose, without slowing her steps. A few long curls she missed drooped down her back.

She needed this run. The exercise opened her lungs and stretched lean athletic legs until the energy flowed through her toned body like liquid fire. It was invigorating. In a crazy troubled world, it kept her sane. She picked up the pace and ran and ran, not stopping.
Being in good shape had its advantages. While other hikers huffed and puffed after a while, turning around before coming this far into the forest, Sophie could run for miles without stopping.

As a nurse always battling injury, disease, and death it was important to remember you were healthy and alive.

The reason she had decided to visit Ward Pound Ridge.

She had first heard of a crazy old man called the Old Leather Man at the Greenwich Audubon Society a while back, when she attended a presentation and hike. His presence in these woods in the mid 1800’s was an unsolved mystery and being a naturally curious woman who loved history, she wanted to learn more.

By today’s standards, he would be considered a homeless vagabond, but the Leather Man had a home. His home had once been the numerous wild spaces of Connecticut and New York. Still, he would have accurately depicted the description of a vagabond or wild man. He made his clothes out of thick leather scraps, carefully hand stitched together to form a durable outfit that helped him survive the elements.

The heavy suit was how he got the name.

No one knew his real one, not for sure. He lived for many years in caves. One happened to be at the Greenwich Audubon property and another right here.

After the lecture at the Audubon, Sophie had read all about the Old Leather Man, fascinated that a man could live alone in the woods without the normal creature comforts most needed to survive.

Today she was revisiting another of his caves.

Moving closer, she again wiped the sweat from her brow and then ran her damp hands along the material of her athletic shorts.

The gnats still wanted to be friends.

Slowing to hike the last uphill area, she swatted them away again.

Of course, they were too fascinated with her curly ponytail to actually leave. They liked her too much.

A few more steps climbing up the dirt and twig laden path, she found herself at the entrance of the cave. Her heart pounded with excitement. The cliff directly behind her was a high point on the trail, but she wasn’t going to scale it. As she looked around, she noticed many outcrops and smaller shelter-like formations.

Directly ahead, large chunks of rock, which at one point in time had broken away from the cliff, now hung above her head at jagged angles, creating an inscrutable pyramid-shaped entrance. Sophie found it easy to envision the Old Leather Man coming to one of these caves just before dark, starting a small fire with precisely placed kindling waiting in the fire pit, and then preparing a meal and resting.
As she entered, the interior was tighter than remembered, fostering claustrophobia. She was a tall slender woman and had to duck down to make her way inside where large slabs of schist and gneiss formed ceilings and walls. Crouching slightly, she moved forward only to be engulfed in the cool, murky shade. The interior fell back into a rich mosaic of darkness.

While most of the cave remained dark, the space directly in front of her was lit by the sun. Smaller than she remembered, it was not a gaping cavern but more like a cozy protected nook. It was a safe place to sleep for the night, large enough to stay out of the weather and be warm from the fire.

“What the hell?” she murmured as a horrid stench stung her nose.

It reeked as if something had died. It had.

As her eyes adjusted quickly to the dim interior, Sophie looked around, ready to see a decaying carcass of a raccoon or squirrel. Instead, she saw a bloated body propped sitting in the far corner, half hidden by a jutted rock outcrop. 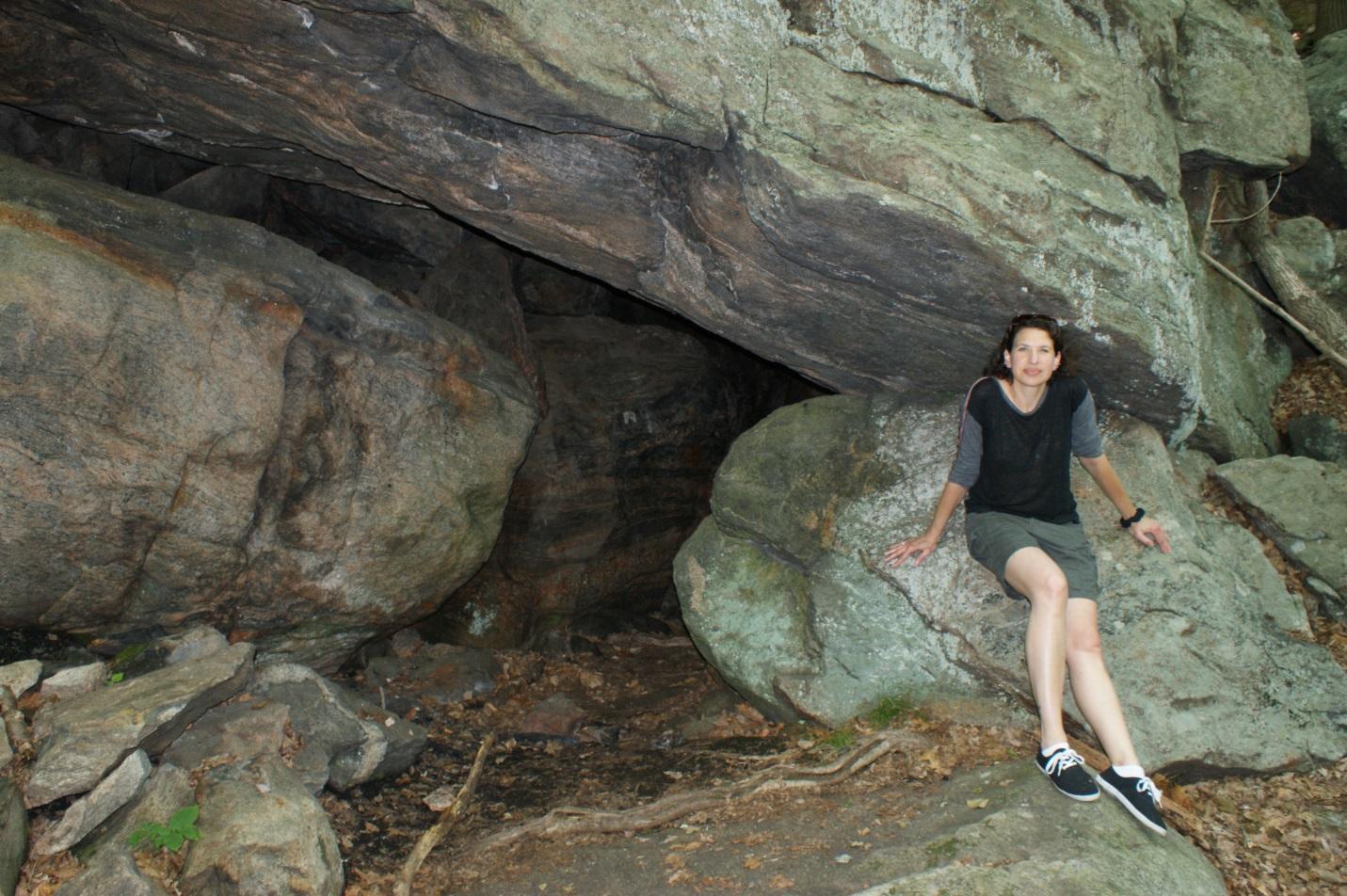 Lisa Acerbo is a high school teacher and adjunct instructor at the college level, holding an EdD in Educational Leadership. No Trouble at All is her third novel. Her first novel about zombies, vampires and romance, Apocalipstick, was published in 2013 followed by a young adult science fiction novel title Remote in 2014. In addition, she has contributed to local newspapers, news and travel blogs including The Patch and Hollywood Scriptwriter. She lives in Connecticut with her husband, two daughters, three cats, and horse.

Stormy Vixen said…
I enjoyed the excerpt, sounds like a really thrilling book, thanks for sharing and good luck with the tour!
26/10/2015, 19:53

Unknown said…
Thanks for being the first stop on my book tour and hosting No Trouble at All. For anyone with questions, please email me at Apocalipstickthebook@gmail.com or find me on facebook at www.facebook.com/lisa.acerbo.5. There is also a Goodreads give away going on. To win a free book, enter at www.goodreads.com/author/show/6191261.Lisa_Acerbo
26/10/2015, 20:39

Ally Swanson said…
I really enjoyed reading the excerpt. This book sounds like such an interesting read! Also, I totally like the book cover! Very intriguing!
27/10/2015, 12:20