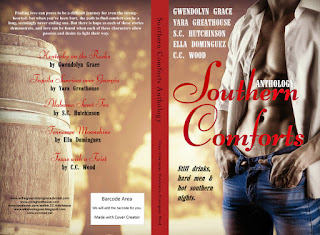 Only 99 cents for a limited time!

Finding love can prove to be a difficult journey for even the strong-hearted, but when you've been hurt, the path to find comfort can be a long, seemingly never ending one. But there is hope as each of these stories demonstrate, and love can be found when each of these characters allow passion and desire to light their way.

Kentucky on the Rocks by Gwendolyn Grace:
Josette Lewis has been living a lie and needs to get out of Kentucky as soon as possible. To her devastation, the ultimatum she gives her long time boyfriend, Derek, has backfired. Before she can tuck tail and move home to California she must put her house on the market and upgrade her security system to keep Derek out of her life for good. When, Aidan Ross, a hunky security consultant shows at her front door Josette is instantly charmed by his sexy grin and easy-going ways. Can she let go of her familiar pretenses and allow Aidan convince her to take another chance at love.

I loved his dominance in bed and that he took from me what he wanted. I loved his dirty mouth as he described everything he wanted to do to me and followed through on every word. He had total power over my pleasure, and I was all too happy to give him the control.

Tequila Sunrises over Georgia by Yara Greathouse:
Gia chooses to fill her life with work instead of love. As the top home designer in her firm, she is prepared to handle anything… until she meets Carter. He owns the company that was hired for renovations and he takes a very hands-on approach to everything. Suddenly Gia finds herself daydreaming about Carter demonstrating his hands-on abilities with her… One night, after a few drinks, their imminent attraction takes over and an agreement is made: They will be each other’s sexual comfort and nothing more for the length of this project. Will they be able to keep their arrangement without complications? Or will it be too hard to say goodbye?

I taste her, lick her. I inhale her. I don't want the moment to end.
She tastes like mint, cherries and obsession.
I press behind her back, pulling her closer.
We lost ourselves in that kiss.
We found each other in that kiss.
Our bodies melded while we kissed.
It was a perfect unexpected seal.
I was out of breath and willing to let her take all my oxygen.
It was a kiss to be remembered.
A kiss where our lips worshiped each other and marred us for other people.
When we finally came up for air, it was done slowly.
I don't think I will experience another first kiss like this with anyone else, because I want all my future kisses to come from her.
Only her.

Alabama Sweet Tea by S.C. Hutchinson:
After ten years, Christi thought she left Alabama and all it represented behind. Her life was great. She loved her job, loved her friends, and loved city life.
Brian has become quite a success as an attorney. His opponents cower before him and do everything to avoid facing him in an actual court room. Ten years ago, his life changed. She disappeared from his life, but not from his heart. She is the one 'case' he could never crack.
Now, she has returned home to bury her father and settle his estate. Is this his chance? Will he find answers to his questions?

She felt his hands reach for hers. His fingers caressed the smooth skin on her arms until they found the top button of her blouse. He broke the seal of their kiss as he began to speak.
"If I were to tell you that I loved you before we were introduced, would you believe me?" The first button was unfastened. His hands slowly slid toward the next button. "If I told you that I know more about you than you realize, would you know I spoke the truth?"

Tennessee Moonshine by Ella Dominguez:
Everyone finds comfort in something different, for Dustin, it's decorating his flesh and brewing moonshine. Businessman by day, he hides his passion for ink beneath a suit, but when he meets a beautiful stranger at a local tattoo shop who then shows up at his place of business, there's no hiding his attraction for her. Sparks fly when they give into their desires, but it's only when they learn to let the past go that they find comfort in one another.

"Find anything interesting?" he chimed in, startling her.
She promptly jumped up. "You've been quite thorough. From what I can tell, anyway. I'm no expert on these things. I was worried that..." her neatly plucked eyebrows slammed together.
"That I wouldn't remain professional after our little encounter?" Defensiveness tinged his words as he stepped into the office and strode toward his desk.
"Little encounter?" Uncertainty laced her words.
"What would you call it?" he glared at her.
"I wouldn't call it anything." When she saw him wince, she whispered, "God, that sounded bad. I didn't mean it to come out like that." She sighed and sank into the chair across from his desk. "I'm so bad at this."
He seated himself and crossed his arms over his chest. "This?"
"Dating."
"Is that what we're doing?" he asked when her eyes flicked upward and met his. "Dating seems like a big leap. I thought we were just getting to know each other."
"I suppose," her voice lowered to a whisper.
Now it was his turn to apologize. "Damn, we're both bad at this. I'm sorry, I just thought we had a genuine connection the other night and after talking to you all week... I thought... Oh, hell..." he broke off.
"There is a connection. You're not wrong about that," she leaned forward on her chair to reach her hands across his desk. "I enjoy your company," she skimmed her fingers over the tops of his hands. "And I love talking to you. It's been a long time since I've done this thing we're doing. And you have no idea how grateful I am that you're still willing to work on my finances despite my being so...," she moistened her lips in a nervous gesture and fidgeted with the nameplate on his desk, "distant. But I have my reasons. I just can't go into them," the loud gulp of her swallow could be heard. "Not yet, anyway."
"I get it," he swiftly cut her off and reached for his coffee.
"Good," she exhaled a loud sigh of relief. "So can we go back to your place again or what? I've been dying for another taste of that moonshine and to get you in the sack again."

Texas with a Twist by C.C. Wood:
In high school, Gabby yearned for Logan Westfall from afar, unaware that he wanted her just as badly. But Logan had a plan- to leave his hometown as soon as he graduated, so he never made his move.
Fourteen years later, Logan returns and his sights are set on Gabby St. John. He walked away from her once, and it's a mistake he won't repeat. She's the one that got away, but not for long.

"Just promise me you'll give me and us a chance, Gabby."
"One day at a time," she whispered.
"One day at a time."
"Okay."
Instead of answering, Logan kissed her, his lips soft and sweet. Gabby felt her heart turn over at the gentleness of his touch. He was offering her everything she ever wanted. She only needed the guts to take it.
She climbed off his lap, holding out a hand. He took it and let her help him to his feet. Without a word, she led him into her bedroom.
If they were going to take this one day a a time, then she wanted to make the most of this day. And every day that she could.

Come join the Facebook Event already in full swing with guest appearances by the authors of the Southern Comforts Anthology and many others.