#Spotlight #Giveaway: 'Land of The Living' by James Pinard 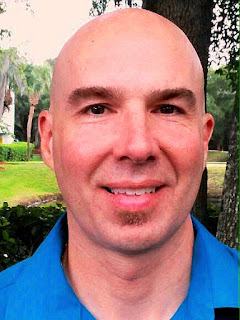 James Pinard is a writer

he currently resides in Orlando, FL where he works as a Computer Programmer for

an insurance company. He has two beautiful, awesome children Michael and Ariel

who inspired characters in his latest creation, “LAND OF THE LIVING.”


His past works include

and “DEARBORNE” in PULP EMPIRE Vol 2 by METAHUMAN PRESS available on Amazon. He


“LAND OF THE LIVING” began

as a labor of love on a subject matter that is close to his heart. One of his

favorite subjects is time travel and his favorite decade is the eighties. After

having lost both his parents and his sister to cancer, he decided to come up

with a story about traveling to the 1980’s to see them again. The story just

grew from there and the rest as we say is history.

were gone, but he slowly realizes that he’s traveled back in time to an

alternate version of the eighties. President Kennedy is still alive, and the

head of a secret time travel program, and perhaps the strangest thing of all –

his loved ones are still alive.

He faces a challenge for which he’s not prepared, but he

doesn’t have to fight his battle alone. To his amazement, his son, Michael,

But another mysterious time traveler hunts him from the

shadows, and James’ journey becomes a race to save his future existence in the

Land Of The Living… 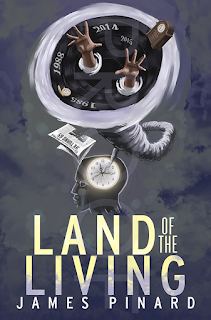 Grab your copy of the book: http://www.amazon.com/Land-Living-James-Pinard-ebook/dp/B0161Y8DMA/

Let's look at a snippet!


I woke up in a drawer in the County

My eyes opened to see total darkness. I didn't know where I was.

All I knew was that it was pitch-black in every direction and I couldn't move.

"Are you in there?" the familiar voice of a woman called

"Michael? Are you in there?"

I'm in here! I thought as I tried to

respond but the words wouldn't come. I couldn't move or talk. The drawer slid

open and the bright lights overhead blinded me.

"You made it! Are you okay?" Daria asked.

"Michael? Is that you?" She asked again.

I stared back but didn't know what to say. I tried to sit up in

"Yeah it's me. Wow. This kid can't be more than twenty years

old." I tried to stand but almost fell down in the process.

"Twenty-two to be precise, college student who died from a

drug overdose. No structural damage to the brain or the body." Daria

responded with the facts.

"And yours? Wow! You look hot!" I couldn't help but

died from a drug overdose. No structural or brain damage either."

"I guess youth and beauty can't buy you happiness."

"Funny. We need to hurry before someone spots us."

"Did we get in before decomposition set in?"

"Yes. They've only been dead for a few hours. Blood flow

should be back to normal with the increased brain activity. We're good."

"If not, then I guess we'll find out…" I tried to move

my legs but my body felt like it had been through a meat grinder. I looked down

and everything was still in place.

before we were spotted. The two men scanned the room with their weapons while

Daria and I crouched down on the floor behind a table.

"Are you okay?" I whispered.

"Good. Because I feel like I can move now!" I said as I

leapt up at one of the men, took his gun, and forced him to shoot himself in

the chest. In another swift motion, I moved his arm out and pointed the gun at

the other man, and fired the weapon, sending a bullet that hit him directly in

the forehead, causing blood to splatter and the man to fall backwards.

"Do I know you?" I said as I stood over the young man

that I just shot in the chest, as he lay motionless on his back. The young

man's eyes looked up at me. They were still full of life, but fading away quickly.

"I said do I know you?" I pointed the weapon directly at

"Are you Michael Creed?"

"I was sent here to stop you." The man looked up at me

and stared dead in my eyes with whatever life he had left.

"Do you have a message for me?" I asked.

"The message is only this. What you are doing will destroy

what is left of the human race. Stop. More will come to hunt you down and kill

you. Stop. Kill yourself and the girl. Stop."

"Any last words before I send you back?"

"They will find you and kill you."

I looked over at Daria who nodded her head in acknowledgment.

"Really? That's a shame. Good luck with that."

A single shot rang out and echoed through the morgue.