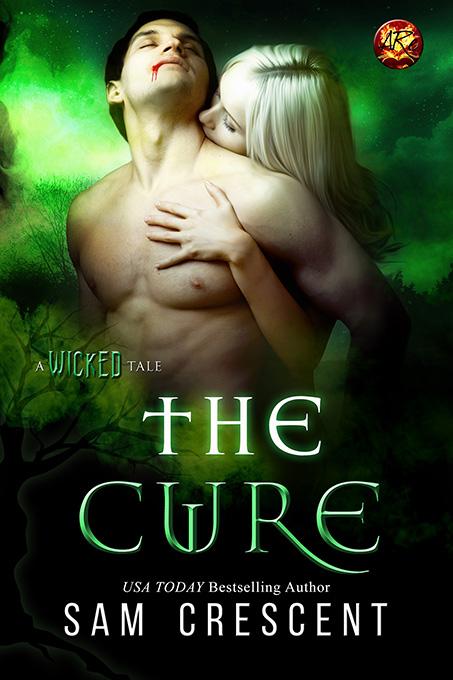 
A Wicked Tale
ARe Books


What will they decide when the two choices are the coward’s way out or certain death?


When Sandra looks into the eyes of a killer, she believes her life is over. The Cure is chasing down wolves, witches, warlocks, and anyone who threatens their control of the world.


Lucas has been watching Sandra for a year. She’s his mate, even though he’s a vampire and she is a wolf. He will do whatever it takes to protect her.


With no choice but to accept Lucas as her mate, Sandra will do everything to fight The Cure that is destroying them. Can a mated vampire and wolf save the day? Or are their days of being mated numbered?


Sandra King ran through the forest terrified for her life. Her pack had just been ransacked by a scourge of vampires. She’d witnessed the murder of so many, along with several of her family.


I shouldn’t be alive.


She had run while listening to most of her pack being destroyed. They had been killed, but who had been responsible for giving away their location? For as long as she could remember, and even according to all the history books, wolves and vampires had been at war with each other. She didn’t even know why, only that she had to hate them. During her twenty-five years she’d never once met a vampire, or even touched one.


Tonight, that was all about to change. She kept on running, and when her lungs were about to burst, she had no choice but to lean against the nearest tree trunk trying to gather her senses.


Her heart was pounding, and she couldn’t hear anything other than the howling of the wind. This is what made vampires so deadly. They didn’t have a heartbeat, or a scent to them, and this made them impossible to track.


Some romance fiction talks of vampires and wolves having repulsive smells; it was a complete lie. Vampires didn’t have anything. They were evil to the core, disgusting in every single way. She’d just witnessed so many of them taking out her pack.


A twig snapped in the distance, and Sandra turned toward the sound. Out of her whole pack she’d always been the slowest. Where a lot of wolves had naturally slender bodies, she didn’t. She’d always been plagued to be bigger than most of her pack. Her own mother had put her on a diet to try and get her to slim down so she could attract the right kind of man.


There was no man for her, though. All of the guys had placed her in the friend column, or they had not cared for her. One day she hoped to find a man who would love her for her, and to start a family with him. She loved kids, and one day she would love to have many children call her mother, and love them.


Staring up at the sky, Sandra closed her eyes in the hope that whoever was out there didn’t find her.


When she opened her eyes again, she knew it was the biggest mistake she’d ever make. She’d let her guard down, and now she was staring into the scariest eyes she’d ever seen. His eyes were black, and reminded her a little of a shark just before it struck its prey. Her heart pounded and for several seconds neither of them did anything.


Suddenly, he closed his eyes, and when she looked at him again his black eyes had changed to brown, and he looked almost human. She opened her mouth about to scream, and he sprung into action. He pressed his hand against her mouth, wrapping an arm around her waist, and tugged her close so that her back was to him. At first, she tried to fight but he was just too strong, keeping her locked into place.


“Don’t scream, baby. You scream, they all come running, and I won’t be able to protect you.”


She was confused. He was the one who was trying to kill her.


The man, whoever he was, wrapped his entire body around her, placing his hand over her heart. What the fuck was he doing?


“Be still, be quiet, don’t make a sound,” he said, whispering the words against her ear.
Sandra couldn’t believe the response he gained from her body. Heat spilled between her thighs, and she had to fight her own need to reach out and touch him.


The vampire behind her didn’t say anything. He didn’t respond even though he must have scented her arousal to their closeness.


Couldn’t the ground just open up and swallow her?


Sam Crescent is a USA Today Bestselling author who is passionate about romance. She resides in the UK, and loves creating new exciting characters that take her on a journey she never expected.


When she’s not panicking about a story or arguing with a character, she can be found in her kitchen creating all kinds of havoc.


For more information on other books by Sam, visit her official website: www.SamCrescent.Wordpress.com