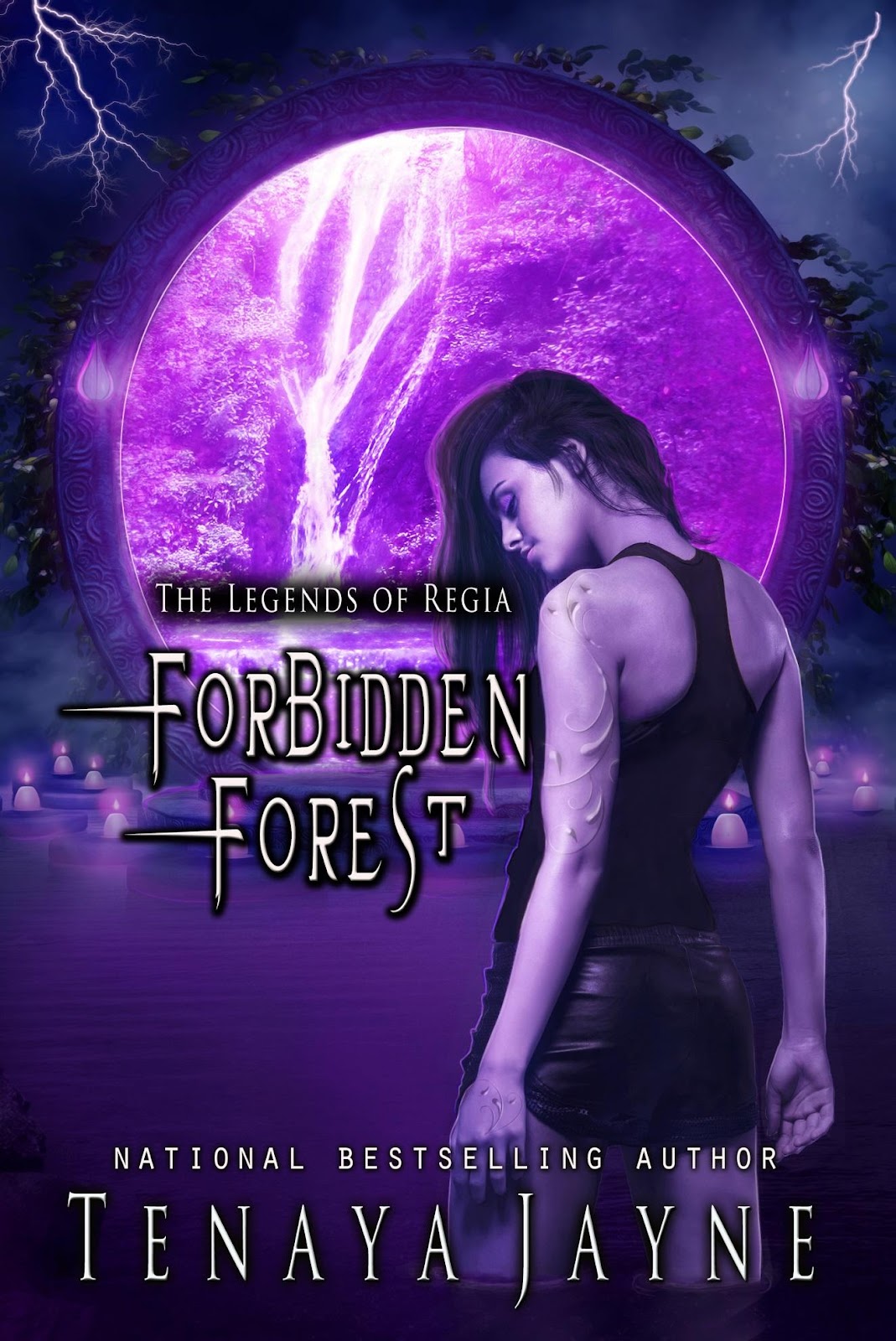 Forbidden Forest
The Legends of Regia
Book One
Tenaya Jayne

Born in shame. Cast from society. Shape Shifter/Elf hybrid, Forest must fight for any respect she can get. Targeted in her youth by a vampire noble who placed an illegal slave mark on her, she is forced to obey him, no matter what.

Slipping the grip of her master and abandoning the prejudice of Regia, her native world, Forest takes a job on Earth, guarding the portal, using her skills as a warrior to enforce Regia's laws. Now, called home for a black ops mission, Forest must put aside her own prejudice to transport the vampire prince, Syrus, through enemy territory in a time of war.

Prince Syrus, mage and master of the Blood Kata, wants Forest more than he's ever wanted anything. In spite of their mutual mistrust, their attraction cannot be denied. Through the danger of their mission, and the secrets they both keep, it doesn't matter what they feel. Forest is forbidden.

Forest pressed her back against the cool concrete wall, wanting to remain aloof from the entity of the crowd. She chose her position in the shadows, out of the paths of the roving, multi-colored spotlights. She closed her eyes and enjoyed the feeling of the undulating human pheromones flying around on the air. At the beginning of every shift, she allowed herself a few minutes of this alien/human experience, though she didn't fully comprehend the combination of dancing, drinking, and ear-breaking sound waves. They loved it, however, and never seemed to deviate from the recipe.
These were the people she was sworn to protect. She had developed a light affection for the human race and considered them a benign, if not slightly silly, bunch of creatures. Her religious passion for her job was rooted in hatred of that which harmed the humans, not a superhero tendency to protect the weak.
Forest opened her eyes and focused all her senses to sniff out the illegal suckers that tried to sneak through the portal. She was in the zone tonight, and not for the first time did she feel that hers was the best job in existence. It was a shame she couldn’t legally kill suckers in her native world.
Over the next two hours, Forest didn’t move from the wall. She monitored the light traffic through the portal: two shifters and one elf, each of which nodded to her respectfully as they passed. Yawn. The shifters left the club to enjoy the delights of Austin’s nightlife elsewhere.
The elf would have been breaking Regia’s law had he left the club, but he dutifully seated himself at the bar and ordered a fuzzy navel. He wore a plaid, porkpie hat, pulled down over the tops of his pointed ears. Forest didn’t know him personally, but she had seen him in here before. The bartender surveyed him with narrowed eyes as the elf nervously tugged his hat down further and ordered a few more girly cocktails.
Intent on making sure that not one sucker was able to sneak past her, Forest was blindsided by the drunk bubba who had been trying to catch her eye for the last twenty minutes. He had finally decided to stagger over to hit on her.
“Hey babe, you’re too beautiful to look so lonely. How’s ‘bout I buy you a drink?”
“How’s ‘bout I call you a cab instead?” Forest mimicked his drawl.
“Only if you share it with me, Darlin.” He leaned in closer, and Forest’s throat began to sting from the noxious fume of booze mixed with his natural musk.
“While I appreciate the offer, Jethro, it seems only right to inform you that I’m not actually attractive at all. If you leaned in a little closer, you’d see that you’ve fallen victim to the effect of beer goggles. A hag like me can’t take advantage of a stud like you.”
As he leaned in, Forest instantly enlarged her nose, pockmarked her skin, evaporated her front teeth, and added a large black mole with a long hair sprouting from it for good measure.
“You’re no hag, baby! You’re the sexiest little thing in…I…uh…" He stumbled backward. “Good grief! Sorry, sorry…” he stammered, retreating. “I’ve gotta quit drinking,” he mumbled as he turned away.
Forest chuckled to herself once he absorbed back into the crowd. Being a shape shifter sometimes had unusual perks. 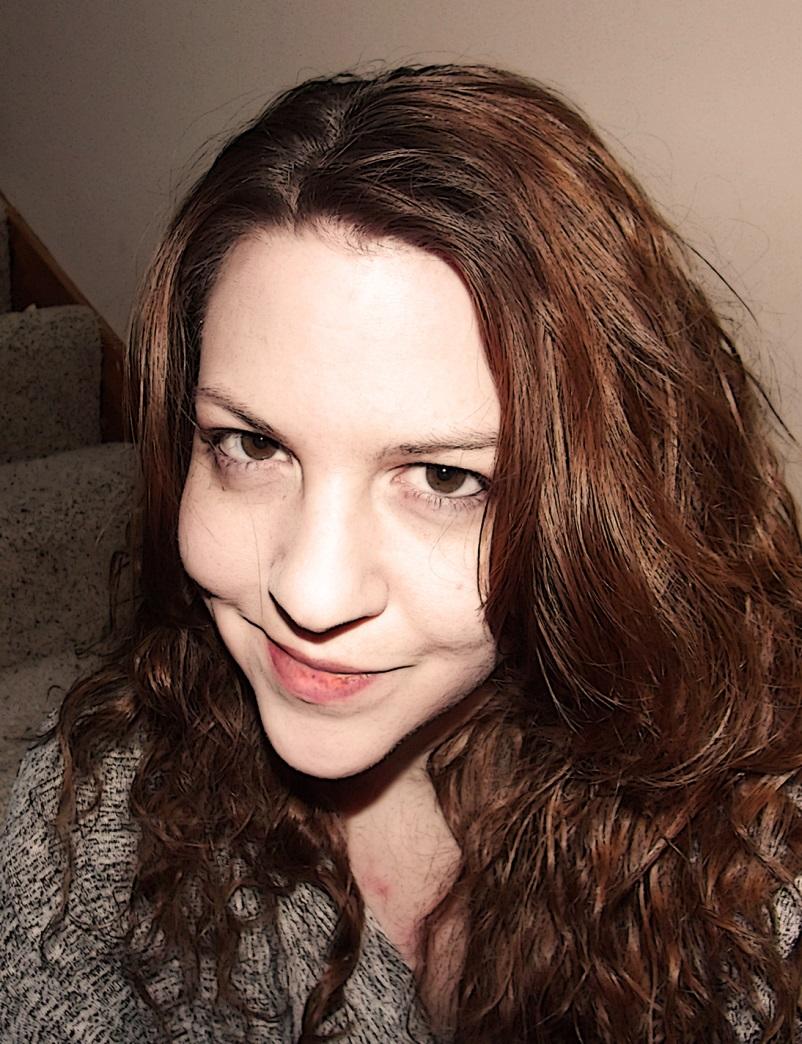 Nationally Bestselling author Tenaya Jayne has always walked a shaky line between reality and fantasy. A nomad by nature, she's lived all over the US, and now resides happily in the Midwest, with her husband and sons. She's an advocate for Autism awareness and women trapped in abusive relationships, and feels everyone has too much pain to not enjoy an escape into a fictional fantasy world. Her passions include reading, independent and foreign films, cooking, and moody music. For more about Tenaya and her books, visit www.tenayajayne.com

1 set of The Legends of Regia on Audible