Genre: Science Fiction/Romance with a Splash of Paranormal 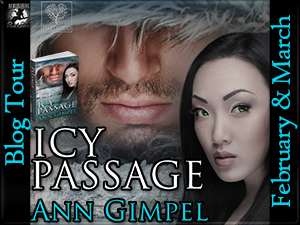 Fresh out of residency, Dr. Kayna Quan opts for a tour in Antarctica. Money is short, so she hires on as medical officer aboard a Russian research vessel headed for McMurdo Station. Primed for almost anything, she plays her paranormal ability close to the vest. Being odd man out in a world where most don’t believe in magic makes her wary and feisty.

Brynn McMichaels has been stationed on remote South Georgia Island for two years, and he’s eager for a change. When cultures of the single-celled organism, archaea, overgrow their bins in his lab and begin shifting into another form, he worries he’s losing his mind and talks with scientists at McMurdo, but they have problems of their own—bad ones. After he hears about them, Brynn agrees to help. The weather’s too uncertain to send a plane, so he hitches a ride aboard Kayna’s ship and brings his mutant culture colonies along.

Attraction sparks, hot and powerful, between Brynn and Kayna, but her disclosure about her magic is a tough nut to crack. It doesn’t help that her dead father is stalking her. Lethal cultures, bizarre illness, and McMurdo’s refusal to let them land force Brynn and Kayna into an uneasy alliance. Will their fragile bond be enough to thwart the powers trying to destroy Earth, and them along with it?

…“Dr. Quan,” someone screamed at her over the howl of the wind. She spun, almost lost her footing, and snapped up another cable.

“Coming.” She ducked through a door onto deck four, bent double, and shook her head briskly. Water flew everywhere. She straightened, shoved her hood aside, and more water ran down her back.

The ship’s staff captain, second in command on the vessel and staunchly British, clucked in annoyance as he tugged the heavy, reinforced steel door closed, latching it securely. Muscles bulged in his arms and shoulders as he wrestled with the uncooperative door. “Thank bloody fucking God I found you,” Harold Markham blurted and grabbed her arm. Panic streamed from him in waves that battered her paranormal side.

“Tell you on the way.” A corner of his mouth twisted downward. “Be grateful. This saves you from a harsh lecture about going outside in rough seas, without telling anyone.” He yanked on her trying to jockey her down the corridor.

“Stop that!” She raised her voice for emphasis. “If there’s a medical emergency, I have to know what it is because I’ve got to stop by the surgery to get my bag and anything else I might need.”

“Oh.” An uncomfortable look washed over Harold’s face. Worry etched lines into the skin around his blue eyes, and he raked a hand through unevenly cut blond hair. He lowered his voice and spoke near Kayna’s ear. “It’s one of the Russian seamen. He caught his arm in machinery. It’s bad.”

It was a stupid question since he wouldn’t know. Kayna made a dismissive gesture with one hand and said, “Don’t bother trying to answer.” She sprinted past him, stopping in the corridor outside the suite that contained both her surgery and living quarters. “Maybe you should have someone carry him here,” she told Harold. “At least I have an exam table we can strap him to.”

He shook his head. “You need to have a look before we even think about moving him. He’s on the raised walkway in the engine room, and there’s more blood than I’ve ever seen.”

Kayna keyed an electronic code and let herself in. She shucked her soaked jacket, threw additional items into her medical bag, and raced to where Harold waited in the corridor, bristling with tension. “How do I get to the engine room?” she asked and jerked the door shut. “I walked through it at the beginning of the trip, but I don’t remember—”

“There’s an access door at the end of Deck Three. I’ll be right behind you,” he cut in, his normally cavalier voice edged with anxiety.

She fought the rocking ship, moving as fast as she could, and hustled down one flight of stairs. Once there, she ran toward the door that led into the bowels of the ship where the engine took up two decks. Harold followed hard on her heels. Her heavy bag, coupled with the ship’s unpredictable motion, almost landed her on her ass—twice. When she glanced back at Harold, his face was set in grim lines. He’d given up any pretense of unnecessary conversation, but he held out a hand for her bag and opened the door just wide enough for her to squeeze through.

Adrenaline hummed along her nerves as she navigated steep, oily steps into the heart of the ship, grateful she could hang on with both hands. Her clumsy bag would’ve made the stairway treacherous. Engine noise hit her in the pit of her stomach, and she wished she had ear plugs.

Footsteps pounded toward her, and one of the Russian engineers came into view. He motioned frantically and added a volley of Russian. Close-cropped black hair hugged his skull, and his dark eyes held a haggard edge. Blood spattered his dirty white T-shirt, leaving a hell of a mess.

“Lead the way.” Kayna didn’t know if he understood, but it didn’t matter because he spun and raced back in the direction he’d come from. Two more twists of the corridor and she heard screams even over the noise of the ship’s enormous twin engines. Another moment and she saw a tall, bald man writhing in a pool of his own blood. A close-to-severed arm lay next to him. Kayna dropped to the metal decking and made a dive for the brachial artery running beneath the man’s arm, afraid if she hesitated long enough to glove up, she’d lose him. Straddling his body, she put pressure on the artery while the seaman lashed his body from side to side like a bucking bronco.

“Get me a clean towel or shirt,” she yelled, wondering if anyone spoke enough English to understand, but it didn’t matter because Harold shouted in guttural Russian, dropped her bag by her side, and sped into a side room.

She eyed the mangled arm, and cursed softly. It looked as if a giant had twisted the seaman’s lower arm until the severed section hung from a slender flap of skin. Both the ulna and radius were broken, their white, jagged ends protruding through a sea of tattered flesh. Without a sophisticated operating theater, there’d be no way to save the sheared off limb. Blood poured from the injured extremity, jetting from injured arteries and flowing from torn veins, but at least the rate had slowed. She ran her free hand down the man’s neck, other arm, chest, and abdomen, searching for further damage with a magical assist from her psi ability.

When she glanced up, Harold hunkered next to her and handed her two bath towels reeking of bleach fumes.

“Thanks.” She nodded sharply. She’d been so focused on assessing if the seaman had other significant injuries, she’d missed the staff captain returning with towels. She folded one, tucked it into the wounded seaman’s armpit, and pressed as hard as she could while the sailor shrieked and thrashed, clearly in agony. “Put your hand where mine is,” she told Harold. He complied immediately, and she twisted to reach into her medical bag for a syringe and a vial of morphine. She thought about gloves again, but she was already coated in the man’s blood.

She guesstimated the seaman’s weight, did some quick calculations, and hoped to hell she’d gotten them right as she drew enough morphine into the syringe to dull pain, but not totally knock him out. He thrashed wildly beneath her, his blue eyes so crazed with agony they were nearly all pupil. “Hold him down so I can give him this,” she said.

Harold started to move his hands. “Not you,” she cried. “Keep pressure on that artery so he doesn’t bleed out.” Harold barked a command, and four burly seamen stabilized their wounded companion. Kayna plunged the syringe into the meaty part of his other arm. Her jaw clenched as she waited for the morphine to spin its magic. She dropped the empty syringe back into her bag and pushed Harold’s hands aside, replacing them with her own.

“His arm?” the staff captain asked in a rough voice.

Kayna looked up long enough to meet his gaze. “His arm is probably toast. Right now I’m fighting to keep enough blood in him so he doesn’t die. The morphine will kick in soon. At least it will give him some relief. Once he settles down, I’ll give him a whopping injection of antibiotics and a tetanus shot.”

“What can I do?” Harold asked.

“Where exactly are we?” she countered.

“Not far from the Falklands.”

“Better news than I’d hoped for. Have someone radio for a medevac helicopter. This man needs a hospital. Actually, he needs a level one trauma center for that arm, but that’s probably not going to happen.”

Harold bolted from the engine room, and Kayna eyed the group of Russian seamen ringed around her. She gestured to one to keep pressure on the towel and dug in her bag for a stethoscope, blood pressure cuff, and a tourniquet. She filled another syringe with a mix of antibiotics and readied it. The man’s body relaxed as the morphine kicked in. Soon she could inject her antibiotic soup without anyone holding him down. As grim and desperate as the situation was, Death was a worthy adversary.

“Bring it on,” she muttered as she checked vital signs and noted them. “I’m going to win this round.”

Almost as if Death had a corporeal presence and had risen to her challenge, a chilly breeze passed through the overheated engine room. She’d sensed Death before when she was pulling out all the stops to save a life, had even mentioned it to some of the other docs when she was an intern, but they gave her such odd looks, she’d never made the mistake of disclosing her paranormal abilities again. When it got right down to it, almost everyone was just as psi-phobic as her erstwhile almost-fiancé.

“Easy,” she murmured and injected antibiotics. The man’s eyelids flickered, and for the barest moment he focused on her. “That’s right.” She patted his uninjured hand and hoped her tone would bridge their language barrier. “Help will be here soon. You’re going to make it.”…

Ann Gimpel is a national bestselling author. She’s also a clinical psychologist, with a Jungian bent. Avocations include mountaineering, skiing, wilderness photography and, of course, writing. A lifelong aficionado of the unusual, she began writing speculative fiction a few years ago. Since then her short fiction has appeared in a number of webzines and anthologies. Her longer books run the gamut from urban fantasy to paranormal romance. She’s published over 20 books to date, with several more contracted for 2015 and beyond.

A husband, grown children, grandchildren and three wolf hybrids round out her family.

Ann Gimpel, Author said…
Thanks so much for hosting me. One of the best parts of these virtual tours is all the great blogs I discover along the way.
24/02/2015, 01:50