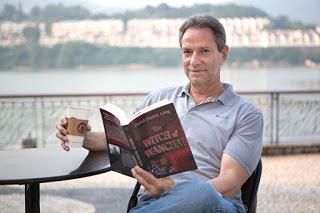 David Harris Lang, a current resident of Hong Kong, has lived and worked in Asia much of his life. Besides being a prolific author of Asian-based thrillers, he is an international architect who brings an indelible sense of place’ to his writing as well as a deep understanding of Asian cultures, locales, and customs. His vivid fight scenes come from a life-long practice of the martial arts. A Devil in Hong Kong is David Lang’s third book.
Q&A With the Author:
Do you have any pets?
I have had dogs all my life. They are pure unconditional love. People should learn from dogs.
What do you do in your spare time when you’re not writing?
Exercise and eat (I am a bit of a foodie) mostly. Writing is my major spare time activity. I also love exploring Hong Kong where I currently live. It’s a fabulous city with a lot of strange corners. 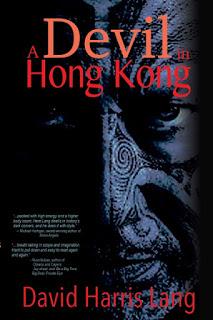 On a snowy day in the year 889, Emperor Wu of the Han Dynasty had an epiphany: he was not immortal. His jade carver created the most beautiful jade burial suit in history, finishing just three weeks before the Han Emperor died. When the priceless two-thousand-year-old jade burial suit suddenly goes missing in modern Hong Kong, a brutal competition to find it ensues between rival Chinese, Burmese, and Japanese factions. As they battle for the priceless artifact, a psychotic killer with a Maori tattoo on his face surfaces leaving a trail of dismembered corpses strung together like traditional Burmese puppets. Detectives Ian Hamilton and Angela Cheung follow a trail of hacked bodies and terror through contemporary Hong Kong in their search for the killer.

Snippet:
The police boat pulled up to the dock at Snake Bay. Coroner Cindy Leung was waiting for them, slat-thin arms, her torso the circumference of a chopstick, thick glasses too large for her face. She kind of looks like a praying mantis from this angle, Ian thought, looking down on Cindy from the deck of the boat. Cindy waved to him.
“Hey, Cindy,” Ian said when he, Angela, and Nigel were on solid ground.
Cindy, instead of returning the salutation, immediately started up the path. “Follow me, Detectives. Hurry! I left him hanging for you, but I can’t wait to get him to my lab. This is the strangest one I have ever seen.”
“Ok, Cindy, we’re coming. Commissioner Gu said that the victim had been chopped up and wired back together,” Ian said as he tried to keep pace with Cindy.
“So strange! We would not cut him down until your team had a go at him, of course, so I got up on a ladder to inspect him. First thing that I noticed was that there was a separation of about a centimeter between his neck and body. I found a screw where the cervical spine had been sawed and another one in the neck vertebrae. A wire ran between the two screws, holding the parts together.”
“Aiyahh!” Angela explained as they came to the first gorilla. “This is bizarre!”
“Yeah, I can’t imagine why someone thought that these life-sized animals would be a good idea for a resort,” Cindy said, and then continued, “I also noticed that the rest of the body was hanging very strangely too, not like you would expect. I could not undress him until you are done with your inspection, so I felt around. He had been cut and wired back together in seventeen places. Each part also had another wire attached to it connected to the wood beam that he was hanging from. It was like he was a puppet! A human puppet!”
“How long had he been dead?” Nigel asked.
“Based on body decomposition I would say about four days. I will be able to give you a more accurate answer once I get him to the lab.”
They walked past the abandoned resort building and came upon the hanging corpse. Scientific Evidence Officers were examining the ground below the body. Ian walked up to the officer who seemed to be in charge.
“I am Ian Hamilton from CID. Do you have anything yet?”
“Calvin Chan, Senior SEO. Walk over here, I want to show you something.” Ian followed Calvin about twenty paces to a circular clearing surrounded by low bushes. The clearing, originally envisioned as a courtyard for the resort’s customers to sit, rest, and appreciate nature, had been paved with tan and grey pavers. A giraffe peered over the bushes from the surrounding jungle, its dead, glass eyes wide with curiosity as it gazed into the plaza at the human visitors. Nature had started to reclaim the space, weeds pushing up between the pavers. Benches, which had once been painted white but were now mostly rusted, had been placed around the perimeter. “This courtyard is where he was dissected,” Calvin said, pointing to the center of the circular plaza, stained with blood.
“I wish that giraffe could talk. He was probably the only witness,” Ian said.
“No, I don’t think so. This wasn’t the work of one guy. My guess is that there were three of them. Two different brands of cigarette butts, only a few days old, were on the ground by that bench. I picture one guy doing the carving while the other two watched.”
“It also would be hard for one guy to string him up, so that makes sense, Calvin,” Ian said.
“We’ll send our report to your department within three days,” Calvin said.
When they arrived back at the corpse Nigel was almost finished with his evidence collecting. When he was done he gave Cindy a nod and her team took the body down and placed it into a body bag on a gurney. “See you, Ian,” Cindy called out to him as her assistants pushed the gurney towards the dock.
Ian walked over to Angela, who was photographing the scene. “Make sure that the technicians take the piece of wood that he was hanging from too. There are some characters carved into it.”
Angela said, “Why would the guy be displayed in such a strange way, all chopped up and then wired together, out here in the middle of nowhere? Typically, a killing this gruesome would be to send a message to someone, Mess with me and this will happen to you. How often do people come out here, though, once or twice a year? No one is here to see it. Who was the audience?”
“I am afraid that the audience was the killer himself, Angela. We are dealing with one very sick individual, a guy who took pleasure in what he did, and we need to find him before he decides to entertain himself again,” Ian said.
Nigel said, “Did you see how meticulously the wires were wrapped around the screws? How clean the cuts were? He took his time. He took pride in his work.”
“Just like us,” Angela said.
“Like us?” Nigel asked.
“Our logo, We serve with pride and care.”