The Last Guardian Rises is Book 2 in The Last Keepers’ Daughter Series. It's a Paranormal, Romance, Mystery by Rebecca Trogner (Publisher:  Crescent Moon Press)  and it's the story of  Lily Ayres, Sanguis Ancilla to Krieger Barnes and Krieger Barnes, Vampire King of North America.
Lily Ayres has retreated into the shadows of the archives, hiding from the king and the intense emotions he arouses in her. How long can she deny him? Will she accept her role in the Other world and the abilities arising within her?
King Krieger Barnes has shared his blood, his kingdom, and his heart with Lily. He summons her, needing her nearness, needing her to attend the council meeting with him.
Merlin, the king’s advisor, must fight the darkness that threatens to overtake him. Can he survive the dark magic?
Lucien Black, the wielder of the Dragon Sword, is once again charged with Lily’s protection. How will he explain his avoidance of her?
A being buried deep underground, inside a cage of iron and wrapped in chains, escapes. Is he the dark entity that the Others feel and fear?
Available at Amazon 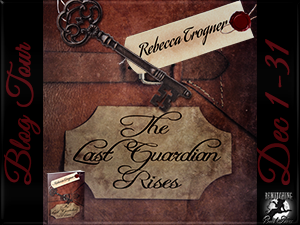 Excerpt:
He came back cradling what looked like a journal in his large hands. It was bound in leather with a faded black ribbon tied around the covers.
“Fell, I guess.”
Lily knew it couldn’t have fallen on its own. And why didn’t the lights come on when it moved? She took the offered book from Liam and rubbed her hand over the old leather. Someone had taken great care to keep it oiled and the leather supple as sin. For now, its contents were silent. Not all texts spoke with her – perhaps this one would later, or never would.
“Ready?” Liam opened the door and waited for her to follow.
Her mind said no, definitely not ready to see Krieger, but her heart beat faster, and she remembered his cool, calm voice, and how she loved the ambiguous color of his hypnotic bluegrey eyes. The night before Lily’s mother was discovered and she’d fatally stabbed Henry, Lily had argued with Krieger. From this vantage, Lily could see how trivial her protestations were. She’d felt he’d betrayed her, though he hadn’t, and because of her, Krieger had staunched the flow of blood through the bond they shared. Now, just a hint of warmth was flowing through her body, that feeling of being connected to him again, that tiny bit of delicious balm soothing her worries.
About the Author:
Rebecca Trogner lives in the Shenandoah Valley region of Virginia, and frequently crosses the Blue Ridge Mountains that were the inspiration for Krieger’s home. She dreamed of being a writer, but got sidetracked by the day-to-day adventures of life. With the encouragement of her family, she has finished her second novel and is currently writing the next book in The Last Keeper’s Daughter series.