#Excerpt #Giveaway #guestBlog: Daithi Kavanagh about Inspiration and 'The Gun'

By Penny BJ - December 18, 2014
It gives great pleasure when a fellow author accepts to post a guest blog on my blog.

This time Daithi Kavanagh, who in on a virtual book tour for his book 'The Gun', writes about what an artist needs the most: Inspiration.

"Inspiration
My wife Caroline and I have been married for eighteen years. She is the person who has inspired me to believe in myself. When I started to play music as a hobby  I wanted to try and make a living from it and Caroline was behind me all the way. I was working as a Builders Labourer at the time and as I was getting older was finding it more and more difficult physically to do the work. I had always played music and sang and I found the courage and belief in myself (with Caroline’s backing) to look for work playing music.
I eventually found work and gradually built up the business. It gives me great satisfaction to know that I was able to contribute to the support of my family by doing something that I loved.
In the same way when I decided to write ‘The Gun’ Caroline was there pushing me along. I would write in long hand in my kids old school copy books, dictate it to her and she would type it up. She sent my book off to every publisher she could find and eventually I was contacted by Tirgearr Publishing who have been a great support to me.
Now she is my secretary and is doing all of the behind the scenes work in promoting ‘The Gun’. I can honestly say that if she  hadn’t been behind me as much as she was that ‘The Gun’ might not have come to the fore so quickly. It would have taken me about 10 years to type it up for starters! I am now learning to type (albeit very slowly) while I am doing a degree in Irish Culture and Heritage Studies. I have just completed my second book in The Tadhg Sullivan Series called The Brotherhood and have started on the  third book. I am actually typing the third one myself which is a challenge for me and a relief to Caroline I’m sure!
My writing space is varied. Due to my hectic life style I tend to write wherever I can but as I said earlier my preferred space for writing is in bed. Here I get the best of all worlds. I get comfort, inspiration, imagination and the odd cup of tea from Caroline! There is nothing i like more than to wake up and have nothing to do but write. This alas is not always possible but when it is, it’s  great. I wake up, head downstairs for breakfast. While eating I usually get the news on the internet, then head back to bed.
Long may my writing career continue for me and my family. I am so grateful to have the opportunity to write and to Tirgearr Publishing for giving me that opportunity."

Garda Detective Tadhg Sullivan leads a special unit that investigates politically
motivated crime. A man known only as The Deerstalker is a cancer who has infected
the Irish political system.

Sullivan teams up with journalist Helen Carty, and together they try tracking down
the mysterious killer. Carty adds to Sullivan’s problems, when he finds himself falling
in love with her. And further complicating things, he starts losing trust in his partner,
Detective Pat Carter, who appears to be on the side of the Garda Commissioner,
who Sullivan is rapidly falling out with.

Sullivan’s case is further thrown into confusion when a copycat killer, Tommy Walsh,
is shot dead by the CIA. When the CIA discovers that they've killed the wrong
person, the two agents involved--Simon, who has become disillusioned by his time
stationed in the Middle East, and Joey, a psychopath who confuses zealotry with
patriotism--are also in pursuit of The Deerstalker.

Sullivan finds himself in a race against time, if he is to arrest The Deerstalker before
the CIA take him out, and use his death as a pawn in a political game of chess.

Who will win out in the end? 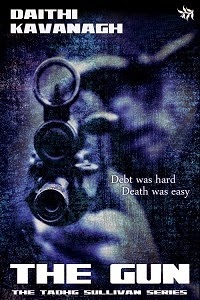 
Excerpt
He stared at the gun lying on the bed.  It was in his possession for nearly half his life and he’d never known what to do with it.  The funny thing was, he’d always hated guns and yet, here he was.

He heard his wife moving around downstairs and knew that very soon she would call him for a cup of tea.  He had to get the gun back into its hiding place.

He thought back to the first time he’d seen it.  A late night knock at the door and a man from down the street had handed the gun and ammunition to him, wrapped in fertiliser bags.

“What the hell is this?” he’d blurted out.

“It’s a gun,” the man had said showing no expression.

“What are you giving it to me for?” he’d whispered, not wanting his family to hear them.”

“Because I trust you,” he’d replied.

“What the hell do you mean, you trust me? You hardly know me! And all I know about you is that you’re mixed up in the IRA.  I have a family and I don’t give a damn about the North.  Now please get away from my door and take that thing with you.”

The man had stared at him, but all calm had disappeared from his features.  Then he spoke through gritted teeth.

“Now listen to me.  The guards are going to be here shortly.  Something serious happened tonight and now you’re mixed up in it, whether you like it or not.  If you don’t take the gun from me now, when the guards arrive here and see us together, I’ll implicate you.  Even if they don’t believe me, it will mean that you’ll have to stand up in Court and give evidence against me. Do you want that for your family?   It would be much easier for you to stick the gun in the boot of your car drive off somewhere and hide it.  But you’d better make your mind up fast, before they drive up and arrest us both.”

He often wondered why he’d taken it.  Was it because he’d had sympathy for the man?  He didn’t think so.  Maybe it was the fear of being implicated, or like the man had said, being branded an informer.  He wasn’t sure, but whatever the reason, it seemed like providence.


BIO
I am 56 years old and I live with my wife and two teenage children in Trinity, Wexford. Up to 2012 when the recession hit Ireland I was making my living as a musician. I then went back to adult education and completed my Leaving Certificate in 2014. I am now studying for a degree in Culture and Heritage Studies at Wexford Campus.

While I was studying for I began writing ‘The Gun’ which is the first book in The Tadhg Sullivan Series.  I have just completed the second book in the series.

I play guitar and sing in many of the pubs in my hometown of Wexford where I am often joined by my two children Ella and Rory who play fiddle and flute.

In my spare time (which I do not have a lot of) I like to walk my two dogs with my wife Caroline.