By Penny BJ - November 23, 2014
Todays' post is about two former child prodigies, two strangers and a prophesy. And Macedonian artefacts! You may not know but Macedonia is a vast area in Northern Greece, the birthplace of Alexander the Great.

That's why I wanted to know more about 'Blood prophesy of Queens' Destiny' by Barb Jones.
This is the blurb:

"Amber Stone, once a child prodigy, has just become curator of a special collection of Macedonian artifacts for the Seattle Museum of Natural History. Chloe, a prodigy of a different sort, holds a position at the museum focusing on tribal art. The two become fast friends, united by Amber's unsettling dreams and Chloe's unorthodox ways of dealing with them. Two strangers arrive in town, bringing with them a prophecy recorded more than three-thousand years ago, a prophecy that places Amber directly in the midst of a battle that has spanned a millennia." 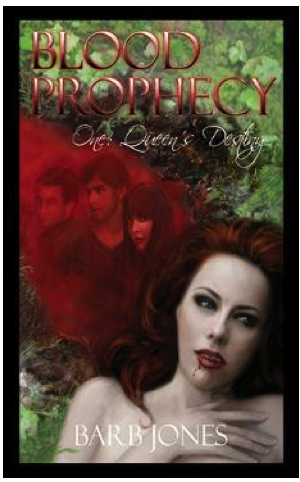 If you want more, here is an excerpt:

"Flames surrounded her.  Amber floated among them, naked again.  She could smell the sweet and nauseating odor of burning flesh, but it was not her flesh.  She looked at herself, saw the flames surrounding her body, and still felt inexplicably cool.  Flames caressed her legs, licked at her back, and mingled with her hair, but she remained undamaged.  From beneath her she heard screams, loud and torturous, rising to a feverish pitch and then ending in gagging coughs.  As soon as one faded others began, and Amber tried but failed to look through the fire to see the people consumed by the flames.

From above, Amber heard more cries of pain, but these were different.  Howls and whines replaced human voices, reminding her of dogs squealing in pain. A new odor assaulted her, the deep smell of burning hair.  Finally, the yells, howls, and squeals came at once, a cacophony that grew in intensity and power until she shut her eyes, pulled her hands to her ears, and screamed herself.

The noise of Amber’s scream was unearthly; even as she opened her mouth it seemed to her that the voice came from elsewhere. She opened her eyes and put her hands down, but found her lips still parted and the hollow, overpowering eruption from within didn’t stop.  It grew in volume until she could no longer hear the cries of those dying in the flames.  She felt her throat growing strained from the effort and wondered why she hadn’t stopped screaming.  Finally, she placed one hand on her chin and one on the top of her head and pushed her mouth shut.

Silence—it fell like a blanket over Amber, smothering the flames beneath it.  She was still floating, but below her was an ocean of bodies.  Men, women, children, dogs—all charred beyond recognition.  Not dogs, wolves. Some were still locked in battle.  She saw a wolf, body still smoking from the flames, with its mouth still locked on the throat of a man burned so completely that his arm was only an ash covered skeleton.  There were at least a hundred dead people and twice that number of wolves.  The stench was overpowering, choking her, and tears flowed down her cheeks as she tried to breathe.

Suddenly the ground was clear and she sat on a bench watching small children playing on a jungle gym.  A little girl in a bright orange shirt and white Capri pants skipped along singing, “The hour, the hour, the hour, born without knowledge of power.” She watched a toddler at the top of the jungle gym climbing unsteadily.  He’s going to fall!  Amber tried to stand and found she could not.  She watched in horror as the little boy fell.  It was about a nine-foot drop, but the boy fell slowly, his overalls rippling with the wind, his dark brown hair flying up over his face.

Suddenly a wolf was there, and it caught the boy in its mouth.  Amber braced herself for the sound of teeth tearing into bone and flesh, but they were gone.  The jungle gym was gone.  The singing girl was gone, and Amber sat on the bench surrounded by a misty red fog.

“You’re the child of prophecy.” Amber stared.  The man from the park, the one with the sideburns, sat on the bench beside her and held out the little boy.  No, not a boy—it was a doll with a ceramic head."

Having been born and raised in Hawaii, Barb Jones loved telling stories ever since she was a child about vampires, werewolves, angels, demons, and witches.  Barb was a little girl who loved scary stories, much to her mother's dismay. The scarier - the better.  Hawaii was a perfect place for stories until she moved to Seattle.  Then she decided to turn a love for the supernatural into writing stories to see if others would love them as much as I do.  Currently, Barb Jones lives in Florida but since she's a Seattle girl at heart, her stories take place in the Northwest.  She continues to write supernatural stories of vampires, werewolves, witches, and more while enjoying the beaches and sunshine.  She also loves to help others and give back to my community.
SOCIAL MEDIA
www.facebook.com/bloodprophecybooks
@TheBloodProphecy_1 (TWITTER)
www.thebloodprophecy.com
Amazon:
http://www.amazon.com/Queens-Destiny-Blood-Prophecy-One-ebook/dp/B00NCN1CJU/ref=sr_1_1?ie=UTF8&qid=1412563644&sr=8-1&keywords=queens+destiny&utm_content=buffer2aa21&utm_medium=social&utm_source=facebook.com&utm_campaign=buffer
Barnes & Noble:
BN.com - http://www.barnesandnoble.com/w/queens-destiny-barb-jones/1120422798?ean=2940150745094
Also Available on ITunes