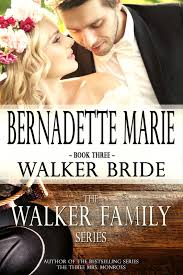 Always the bridal consultant, never the bride. That was former bad girl gone business professional, Pearl Walker's life until she put her hands on Tyson Morgan while measuring him for a tux.

Tyson was happy being a miserable man, taking care of his family's land, and not involved with a woman. However, even he can't resist the pull of attraction to the beautiful, and off limits, Pearl?

The feud between the Walkers and the Morgans had torn apart friends and families for generations. What might happen when Pearl Walker and Tyson Morgan become business partners—and more? 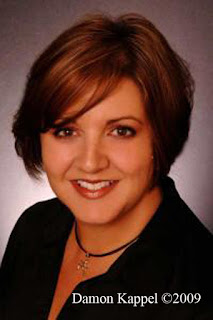 Bernadette Marie has been an avid writer since the early age of 13, when she’d fill notebook after notebook with stories that she’d share with her friends. Her journey into novel writing started the summer before eighth grade when her father gave her an old typewriter. At all times of the day and night you would find her on the back porch penning her first work, which she would continue to write for the next 22 years.

In 2007 – after marriage, filling her chronic entrepreneurial needs, and having five children – Bernadette began to write seriously with the goal of being published. That year she wrote 12


books. In 2009 she was contracted for her first trilogy and the published author was born. In 2011 she (being the entrepreneur that she is) opened her own publishing house, 5 Prince


Publishing, and has released contemporary titles and has begun the process of taking on other authors in other genres.

Bernadette spends most of her free time driving her kids to their many events. She is also an accomplished martial artist, working her way to her second degree black belt in Tang Soo Do.


she always promises Happily Ever After.

Connect With The Author Here:

WALKER BRIDE ~ EXCERPT 2
It had been worth inviting herself to tag along just to see Tyson’s expression, Pearl thought. Okay, she might have made his experience getting fitted for a tux a little too intimate. He didn’t know it wasn’t the norm and in no way did she violate him at all. She was just having some fun.
Tyson Morgan had always been a mystery to her. Of course, he was the older brother of her friend Lydia and he was off limits to any Walker to get to know. That feud between her father, grandfather and uncle with his grandfather had simply been ego—or pride. Pearl couldn’t have been more surprised when it came out that Tyson was, actually, her cousin Eric’s half-brother. That only made him more intriguing--shrouded in mystery and Pearl liked a mystery.
She also liked tall, muscular men who wore boots and ball caps. It didn’t hurt anything that he was twelve years older too. She liked them a little more seasoned than herself though she was no prude.
Pearl gave herself one last look in the mirror that hung over the sink in the back room. Fetching her lipstick out of her purse, she slid it over her lips, then pressed them together. She looked like a million bucks, she thought. Oh, she’d come a long way from the heavy eyeliner, ear piercings, and black hair. She had her mother’s blonde hair. Desecrating it with jet black color had made her skin so pale she nearly looked dead had pissed her parents off. Of course, that had been the point.
Heavy metal had blared from her stereo, and there was always a stash of stolen alcohol in the bottom of her closet. Not to mention she’d spent all of her money on fancy clove cigarettes.
That made her laugh. Now she drank champagne and nibbled on chocolate-covered strawberries with clients. The salon had a standing appointment for her hair and nails. Over the years, she’d become a fashionable and significant member of society.
Still, there was a little deviousness inside of her, and it had come out when that sexy Tyson Morgan walked in her door and she’d draped the measuring tape across his broad shoulders. Work had taken over her life lately. Especially now with so many people in her family getting married. It was time to let her hair down and have some fun. And it seemed as though her body was itching to have fun with Tyson. All she had to do was make her move and make him hers.

WALKER BRIDE ~ EXCERPT 3
“To a Friday afternoon full of promise,” she said.
“What kind of promise?”
She licked her lips again. “I don’t know. Let’s drink and find out.”
Pearl tapped her glass to his and then drank. She’d taken at least two or three sips before he realized he still had his glass in the air and was watching her. Oh, hell, he might as well enjoy this very awkward afternoon. God knew he wasn’t coming to town again for a very long time. And it had been a long time since a woman seemed to throw herself in his path. What wasn’t to enjoy about that? Except that this wasn’t just some woman. This was Pearl Walker, daughter of Byron Walker. The man had little morals and caused everyone in his wake more problems than necessary. But watching her pick up her sandwich and take a bite,nearly did him in. Tyson sipped his beer as he watched her, and he was fairly sure he knew what kind of promise she was offering. What man couldn’t see that?
The true choice would be whether he wanted to get involved in such a thing. This was his half-brother’s cousin. Wasn’t that a little too close to family? He thought again. Really—no—they weren’t related at all, but he was at least ten years older than she was. He didn’t need that headache
either; he thought as he took another sip.