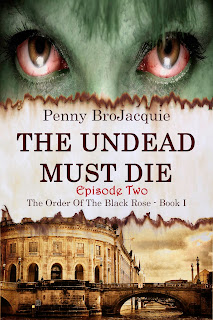 When I first published 'The Undead Must Die' I had different plans for this book and the rest of the book series.

'The Order Of The Black Rose' was intended to be a book series with no standalone books. But then a serious hand injury kept me away from writing for eight months. So I had to make serious decisions and even change plans.


I decided to relaunch 'The Undead Must' divided into two different episodes.
'The Undead Must Die, Episode One' is basically the book that was published last year under the title 'The Undead Must Die' minus the last five chapters.
Episode One is a perma-free available through all major online stores except Amazon. I want everyone to be able to get a copy and get acquainted with The Order of the Black Rose universe.
Those who have a copy of The Undead Must Die published in 2015 now practically own a collector's edition.
I want to apologize for the delays in publishing the next part of my story but I hope for your understanding. Thank you so much for your support. I'll do my best to give you many interesting stories.

After Floriana made the discovery of her family’s deadly secret, she took the bold decision to join The Order of the Black Rose in the fight against those who unleashed the undead plague into the World. However, their mission won’t be easy. They will face an internal enemy, a person above suspicion who proved to be a traitor. They will find themselves in front of a painful decision. They will suffer a heart breaking loss. Nothing will be the same again.